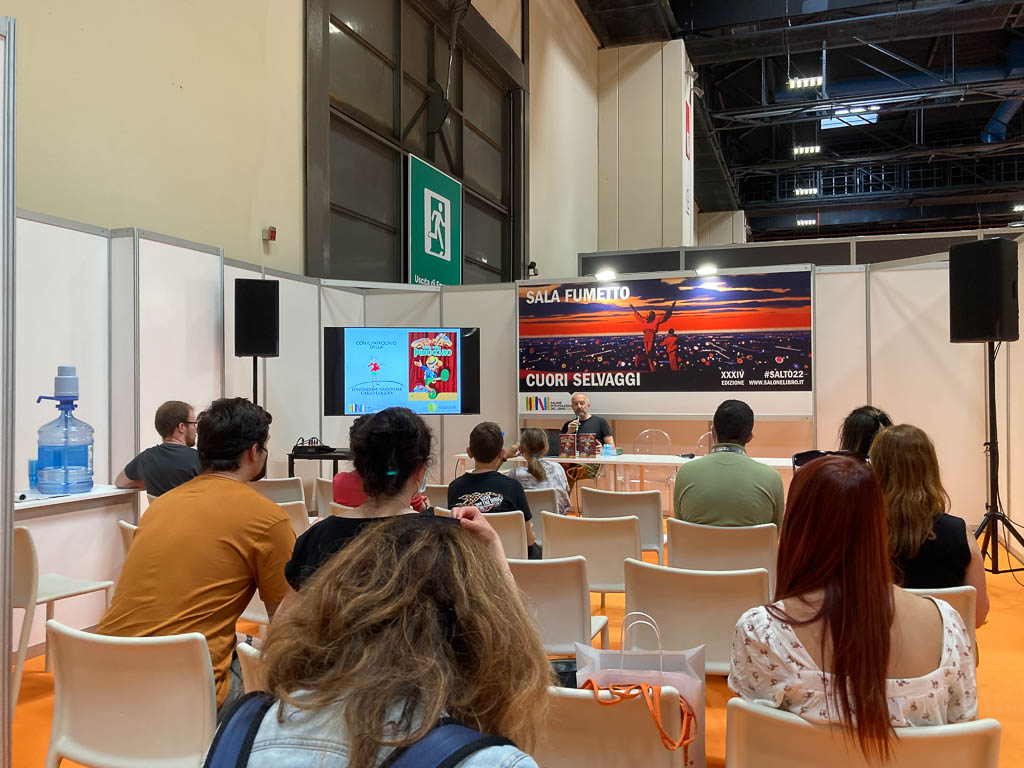 Heavily inspired by Walt Disney’s animated classic, Osamu Tezuka’s take on the tale of a wooden puppet who becomes a real boy Pinocchio (1952) was originally published as a stand-alone book by Tokodo on June 5, 1952.

What it’s about The story opens with a vagabond cricket making his way into an Italian village. Looking for a place to get out of the cold, he spies an inviting shop and makes his way inside, just in time to see Geppetto, an old woodcarver, receive a piece of wood which looks perfect for his next project, a puppet. Although he, the cricket and his pet cat and goldfish are pleased with the new puppet-in-the-shape-of-a-boy, Geppetto makes a wish upon a star for his puppet to become a real boy.

When his prayers are answered by the Fairy with the Turquoise Hair, and newly-named Pinocchio begins walk and talk, Geppetto is overjoyed and sends his new “son” off to school. However, Pinocchio, already with a naughty streak in him, is coerced into ditching school by the crafty pair – the Fox and the Cat. The two take Pinocchio with them and strike a deal with the owner of a travelling puppet show for the string-less puppet Pinnochio to become his new star attraction.

The puppet master ultimately releases Pinocchio and gives him five gold pieces to give to Geppetto, but, on his way home, Pinocchio is overtaken by assassins (the Fox send Cat in disguise), stabbed and left to die, hanging from a tree.

Meanwhile, Geppetto and the talking Cricket set off in a small boat to try and find Pinocchio. Although Geppetto is lost at sea, the Cricket is snatched away by a bird, and eventually ends up saving Pinocchio from his fate. Despite a warning about lying by the Fairy with the Turquoise Hair, Pinocchio’s nose grows and he once again fall in with the Fox and the Cat. This time they coerce Pinocchio into leaving his troubles behind him, and going somewhere where no one will be telling him what to do and how to behave. Of course, what sounds to good to be true usually is, and Pinocchio soon discovers with no one to guide him, he’s on his way to becoming a real jackass (literally!) rather than a real boy. So, with his little a Cricket friend’s help, Pinocchio escapes… Only to end up on the bottom of the ocean.

However, this turns out to be a blessing in disguise when, after he is swallowed whole by a whale, he is happily reunited with his father, Geppetto. Some black pepper, a giant whale-sized sneeze, and it’s a happy ending all around as the Fairy with the Turquoise Hair turns the newly-repentant Pinocchio into a real boy.

What you should know Although the Walt Disney animated classic Pinocchio (1940) was originally released in the United States of America in 1940, it would be twelve years before it made its way to the shores of Japan. However, it instantly had a profound affect on the young Osamu Tezuka. Having just begun working on a “puppet-who-wants-to-be-a-real-boy” tale of his own, Astro Boy (1952-68), Tezuka was so captivated by the Disney animation that he decided to try his own hand at the tale. Of course the fact that it was a golden opportunity to provide the Japanese public with a manga adaptation of an extremely popular film, was not lost on him either.

However, despite the fact that many people assume this was simply a case of Osamu Tezuka ripping off Disney, there is more to it than that. While there is no denying that Tezuka’s take is heavily influenced by the Disney animated feature film, there are also significant differences. Much like Faust (1950) before it, and Cyrano, the Hero (1953), Son-Goku the Monkey (1952-59), and Crime and Punishment (1953) after it, Pinocchio (1952) is actually an honest attempt by Tezuka to adapt a literary classic into manga form.

So, while the character designs for the Fairy with the Turquoise Hair, the talking Cricket, the Fox and the Cat, not to mention the outright inclusion of Geppetto’s pet cat and goldfish, are all most definitely riffs on the Disney feature, Tezuka also restored parts of Collodi’s original novel that were omitted by Disney’s film. In effect, this makes Tezuka’s version something of a bridge between the two, with many of the plot elements blended together.

Although Geppetto receives a block of wood from a carpenter, it is not the talking block of Collodi’s original story, instead Pinocchio comes into being through the magic of of the Fairy with the Turquoise Hair as in the Disney version. Instead of Disney’s dramatic escape from captivity and rescue by the Fairy with the Turquoise Hair, the puppet-master simply sends Pinocchio on his way with a few coins in his pocket. On the one hand, Tezuka spares the Talking Cricket from the untimely death at the hands of Pinocchio that Collodi imagined for him, on the other, he reinstates Pinnochio’s “death” by hanging – certainly something absent from the Disney version.

Even though it would have been easy, and just as profitable, to simply transpose the Disney film into manga form, Tezuka’s great knowledge of literature (and integrity as an artist) drove him to create something new and unique instead. Never one to shield his readers, even the very young ones, from difficult situations, Tezuka’s version of Pinocchio allowed him to take Disney’s sanitized version, where honesty and integrity will see you through, and Collodi’s nineteenth century work, where disobedience and lying will gain you nothing but punishment and death, and find the middle ground between them.